Preparing perfectly smoked meat can take an afternoon to learn, but a lifetime to master. So we caught up with chef Tuffy Stone to get his best tips and tricks for smoking meat like a pro.

Stone is a world-class smoker with an amazing story. A classically trained French chef, television personality and accomplished pitmaster, Stone is considered one of the most successful chefs on the competitive barbecue circuit. In fact, he’s been a judge and host on the Destination America reality television show BBQ Pitmasters since 2009.

Ready to smoke up? Well, get ready to head to your outdoor kitchen or grill island because we’ve gathered some awesome tips and recipes to get you started.

To start smoking, you need to consider three things:

“Smoking is something that’s going to take hours,” says Stone, so ensuring that you have the right equipment and a detailed plan are both crucial.

Your choice of meat, your equipment, and your fuel source combine to determine the amount of time and attention your smoke will require. “Different meats require different cooking times and taste better with different marinades, rubs or brines,” Stone explains. “Brisket and butts are going to take seven to 12 hours, ribs can take four to six.”

Your choice of meat will determine many of the variables in the cooking process—and the quality of the meat also plays a major factor in the outcome. “Buy the best meat possible,” he says. “What really makes a good final product is a beautiful cut of meat and the patience to let the rub soak in and let the smoking process work.”

That patience is key: low and slow is the tempo. “The two biggest backyard smoking errors I see are tenderness and smoke application. People don’t give the meat enough time to cook to tender or they run their fire too hot,” says Stone.

A few other preparation tips from Chef Stone:

Tools of the Trade

Choosing a smoker comes down to one critical choice: how much work you’re willing to put into your smoke job. Smoker setups run the gamut from set-it-and-forget-it, to fires that need to be tended every hour. And “which type is the best” is a hotly debated topic. (see related blog on the pros and cons of grill types)

On the less-work end of the spectrum is a gas/propane powered grill. Ensure that it has separate gas control knobs and can be used as a two-zone cooker – where one side of the grill is running while the other is cool – so that it can hold a consistent temperature of around 250 degrees without directly charring the meat.

If you’re willing to be more hands-on, consider a charcoal or wood-burning smoker for a more authentically charred taste. According to Stone, “charcoal and all wall burning pits make you work to maintain the temperature, air intake and exhaust.”

In terms of wood, Stone says “you want to use a clean-burning wood or coal, so it doesn’t create soot. You have to make sure the fire can breathe.” He suggests hickory, apple, cherry or oak. Avoid mesquite for its pungent flavor, and sap woods like pine, which will ruin food with their acrid smoke (and are also slightly toxic!).

Time to Get Smokin’!

Stone left us with one final piece of advice: when in doubt, use what he calls “The Texas Crutch”, best for smoking pork butt, brisket or ribs. “Just cook it until it’s a beautiful mahogany color. Then, wrap it in foil and put it on your cool side and let it cook another couple hours until it’s fully tender. The foil regulates the smoke and helps keep moisture in.”

He also shared a mouth-watering recipe rib from his new cookbook, Cool Smoke:

METHOD:
Make the rub: Mix sugar, paprika, chili, onion and garlic powders, cayenne, salt and pepper in a bowl. Apply a generous coat of rub to the ribs and let sit 1 hour.

Meanwhile, make the sauce: Whisk together ketchup, sugar, vinegar, molasses, Worcestershire sauce, chili powder, paprika, onion and garlic powders, cayenne, pepper and ¾ cup water in a four-quart saucepan and bring to a simmer over medium heat; cook, stirring, until thickened, about 20 minutes. Remove from heat, measure 1 cup into a bowl, and stir in ¼ cup honey and the apple cider vinegar; set aside. (Reserve remaining sauce for another use.) Pour apple juice into a spray bottle; set aside.

Prepare your cooker or grill. If using a grill, set it up using a two-zone method so that you have both a direct and indirect cooking area. This can be achieved by turning off one of the burners on a gas grill or by putting lit coals on only one-half of the bottom of a charcoal grill. If using a grill, cook on the side of the grill that doesn’t have hot coal or on the side where the burner is off. Place ribs, meat side up, on the grill grate. Maintaining a temperature of 275 degrees (if using a kettle grill or bullet smoker, replenish fire with unlit coals, as needed, to maintain temperature; see instructions), cook, spraying with juice every 30 minutes, for 2 hours. Remove ribs from grill; transfer to two large stacked sheets of foil. Drizzle butter, honey, and sugar evenly over both sides of ribs; position ribs meat side down and close foil around ribs. Return to grill and cook for 2 hours or until tender. This can be checked with a skewer or a meat thermometer. Internal temperature will be around 203 to 205 degrees. Carefully uncover ribs and discard foil. Brush a coat of sauce on both sides of the ribs and return to grill/cooker. Cook for 15 minutes to set the sauce. Serve with remaining sauce on the side.

John Mills
For the last 12 years, John has developed award-winning creative in the hardscape industry. From product catalogs and social media content to reward programs and website design, he has developed strategy and creative for every part of the business. Born and raised in Richmond, Virginia, John enjoys spending his free time outside with his wife, two children and two dogs. The family regularly entertains friends and family in their outdoor living space which includes a beautiful Belgard patio and swimming pool. A huge food lover, John also spends a lot of time working in the garden and hovering protectively over his grill.

The beginner’s guide of this Smoked meat is totally amazing and looks very yummy, thanks for the tips. 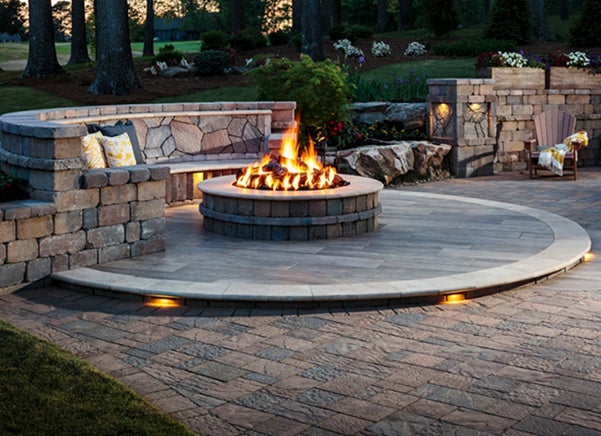